Race week is like Christmas. You’ve spent weeks preparing for the big day. And now your only job is to relax and eat carbs all week. Get 8-9 hours of deep sleep every night. Go on a short, easy run once or twice without worrying about pace– slow and steady to keep your legs fresh but not shot. At the end, there’s the big event when you get to see what’s waiting for you under the tree: did Santa hear your request for a PR? Will he make a good faith effort and get you something similar to your request but nonetheless enjoyable? Or will he completely miss the mark and leave you on the hook for next time? Whatever is going to happen on Race Day Morning has yet to be seen, but there’s joy to be found in the anticipation.

Well, that’s how I started the week anyway… END_OF_DOCUMENT_TOKEN_TO_BE_REPLACED

I can’t believe it’s Week Fifteen. One week until Chicago. Fifteen weeks ago, I was still in Nebraska having just left my job and was starting the preparations to move across the country to DC for a new job. Fifteen weeks ago, our family didn’t have our cat Tucker. Fifteen weeks ago, I wasn’t 8 weeks into my new job and new life back in DC in a studio apartment I love. A lot of life happens in fifteen weeks. I still remember getting the email that I had won a lottery entry into the race and then signing up for it thinking, “So, this is really going to happen? You’re going to let this happen.” And now it’s almost here! END_OF_DOCUMENT_TOKEN_TO_BE_REPLACED

Taper time is here, and I can’t be the only Chicago Marathon participant who is praising God for it. The running community agrees that taper mode is more of a mental exercise than training– you’re slowing down after weeks of heavy training so, even though you know this method is proven to be a marathon best practice, there’s a lot of room to psych yourself out. Am I resting too much? Too little? Am I negating all of my training? For me, I don’t really “get” a taper time. Having missed so much training, I’m still in the balancing mode of overdoing it and doing something at all. Consider that the psychology of taper time has been my state of mind since July 28th– the day I ran 14 miles and all of this hip/calf injury crap began. So, I’ve been tapering for nearly two months and so yeah, I’m over it already and I want this race to be in bed and I want to hear the medal clanging softly against my other medals hanging on my wall as I walk by. I sort of wish there was a way to Hans Solo yourself in carbonite until race day, but there’s not: you have to go through the taper time. END_OF_DOCUMENT_TOKEN_TO_BE_REPLACED

I’m really looking forward to the Chicago Marathon; as in, can it be here already? I started out with a goal to be process-oriented in my training and let the goal of a finish time take care of itself. Each training season has come with a set of life lessons– one mile at time, don’t ever give up, look at what is in front of you and not what is behind you. This training season, I have learned how to be present and let go of expectations. I’m learning that I can still surprise myself and that life can surprise me, too. Being process-oriented means embracing the present, and I have been learning how to accept the runner I am right now instead of fighting so hard to be the runner I want to be right now. I miss my days running 8:20-9:00 paces, but I know I will get back there again. People wonder how running can enrich your life, and I’m telling you– it’s in the small things. END_OF_DOCUMENT_TOKEN_TO_BE_REPLACED

Last week’s training ended on a perfect note. I ran 13 miles all the way through at race pace with no pain and, for the first time, felt like I wasn’t just talking about my goal to run my fifth marathon in Chicago. I knew that a perfect run also presented some physical as well as mental downsides. Physically, would this hip injury thing creep up on me again and how bad would it be? Mentally, can I keep a surge of relief and accomplishment from turning into pride and complacency? Week Twelve would reveal that to me. END_OF_DOCUMENT_TOKEN_TO_BE_REPLACED

Tuesday night in DC was sweltering– 96 degrees with 80% humidity. To be honest, I find that my threshold for running in the heat is pretty high. It is much easier for me to adapt to the heat than to ignore the resentment that I would much rather be in bed. And I was totally okay with a slower run anyway. There were storm clouds on the horizon that concerned me, but I admit that I was too enchanted by the golden sunset behind the thin veil of a silvery thunderstorm not to run. I could see purple-white lightning cracking high in the sky but I didn’t get too nervous until there was a blinding flash of light almost right in front of my face that scared me to death and make me wonder, “Did I just see something get struck!?!” It was that bright. Terrified, I almost turned around and ran home until I saw a man pedaling toward me on a unicycle. He had a joyful smirk on his face, riding high at 8 feet tall on a unicycle in a thunderstorm, like he knew exactly what kind of spectacle he was and equally didn’t care. Having just been spooked by a lightning and with the golden atmosphere and rumble of thunder, it seemed slightly macabre and Wonderland-ish, but I thought if he felt safe riding an 8-foot unicycle in a thunderstorm, I could definitely keep running. About another 0.75 miles ahead, it started POURING. I turned around to run home. The feeling of rain on your hot skin while you’re running in such heat and humidity was incredible. I’ve never felt more refreshed. At the same time, the rain was pelting me in the face. I pressed on, loving every minute of the run but praying I wouldn’t get struck by lightning. Running in severe weather is a rush, but I really do not endorse it. Still, it’s quite possible that it was completely worth the while. 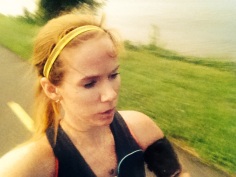 Running in the rain is good clean fun! 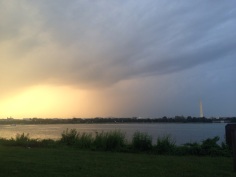 View across the Potomac River from the Mt. Vernon Trail 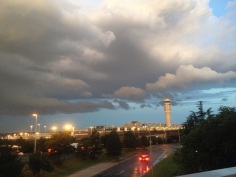 View from the Lady Bird Johnson Memorial looking toward Rosslyn 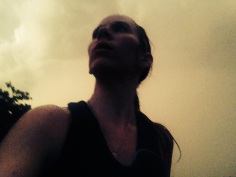 That was a close one…

Wednesday started out with another physical therapy appointment. Tuesday’s run was a little challenging– I didn’t mind that I went slow because of the heat and humidity, but it felt like someone was stabbing my calf muscle the whole time. I’m continually frustrated that this injury comes up again and again, even as I feel like I’m running strong; the next run could be slow and painful. My PT said my injury comes back because my hip and glute strength is not yet on the same level as my running. Honestly, this just made me that much more excited to enter the “off-season” phase and focus on strength-training and other cardio workouts. I admit it. END_OF_DOCUMENT_TOKEN_TO_BE_REPLACED

Last week, after having a successful week of 11.5 miles in week nine, I ran 15 miles in week ten. I didn’t meet my goal of running 20, but maybe that is okay. 11.5 to 20 miles in a week seems like a lot, and I was only trying to build my miles back up for a crash-training month in September. (I honestly have no idea what I am doing here.) END_OF_DOCUMENT_TOKEN_TO_BE_REPLACED

Two weeks ago, I didn’t run at all. This last week, I ran 11.5 miles. It’s nowhere near close to the mileage I need for a decent week of marathon training, but I ran. I ran strong, I ran joyfully and with a sense of determination I hadn’t felt in a long time. It got hard at times as I felt the impact of having lost some of my physical and cardiovascular base over nearly four lost weeks of training.

I hear myself telling people that I haven’t been able to train hard this month and yet I still have high hope that I will finish the Chicago Marathon in October. The answer I get is, “Okaaaaayy.” The problem with explaining to people why you run is that they somehow think you are trying to become an elite runner. They can’t understand why you do it so much, why you push so hard. They hear that you’re injured and think that it’s time to find something else to do or that your time as a runner is over. Like they know you better than you know yourself after the hours of alone time you’ve had with yourself on the trail. I can’t understand that pessimism at all and it’s infuriating because it’s really just a nice way of saying, “I don’t think you have what it takes.” As a runner, you really have to know how to push those comments out of your head and know who you are. END_OF_DOCUMENT_TOKEN_TO_BE_REPLACED

Somewhere in cyber-universe, there is a countdown clock that reads 53:20:21:01. 53 days, 20 hours, 21 minutes, and 1 second until the 2014 Bank of America Chicago Marathon. I only saw that countdown timer when I logged into the Athlete Center to check into the marathon’s deferment policy. I wasn’t planning to pull the trigger on that yet, but I needed to know when the deadline was that I had to make yet another gruesome decision to DNS another marathon, and that date is September 8. END_OF_DOCUMENT_TOKEN_TO_BE_REPLACED

Training these days has handed me a lot of frustrations. I’ve been trying to be patient with what feels like “bad” pace times for me. I’ve been trying to just accept where I am right now with running. They say comparison is the thief of joy, but comparing yourself to yourself is highway robbery. I look back through all of the photos I took of my Garmin watch after long, successful runs and realized I was so hard on myself. One 16-miler, I ran with an average pace of 10:10 and lamented that my time was horrible despite having only gotten 4 hours of sleep and running in the jungle humidity of DC summers. Another 5-miler, I ran with an average pace of 8:56 and said it was not a great run. One of my most memorably strong runs was a 7-miler in 16 degrees last November at an average 8:46 pace and I did say I felt strong after that run, but I hadn’t been running “well” for a few days beforehand and the tone of my post was that I felt entitled to that strong run because I’d had a string of “bad runs” before that one. Those runs were within the last year and now I’d give anything to run paces like that. Something has changed with my running just as I was finally starting to see results in getting faster. These days, I can barely hold a 10:00 pace. I don’t get it. What changed so quickly!? END_OF_DOCUMENT_TOKEN_TO_BE_REPLACED