Fundraising Update: I’m at 10% of my $500 goal to raise money for the Children’s Miracle Network with $50 raised! And there’s still plenty of time to donate. This past weekend, I wasn’t quite sure how many miles I should run on Sunday, so I posed the question to my social media followers and asked for donations in the amount of miles I should run. I got two $25 donations and, while I didn’t run 25 miles this weekend, I was on my feet for 51.7 miles between Friday and Monday. It’s definitely a fun way to contribute. 🙂

Not that I know, but I have heard that the wedding you set out to have is almost never the wedding you actually have. The same can be said about race training plans. Sometimes you take a rest day to take care of some business, and then that rest day has morphed into another rest day and then it becomes three days off then four and then you’re facing five days since you last ran and you’re wondering how that happened. I’m here to tell you, it happens to probably a lot more runners than you know. Just because I “run all the time” doesn’t mean I actually run all the time. I’d say it doesn’t happen as often when I am marathon-training, but I have had a few weeks here and there that were just like….wtf, Sara? It can neither be explained or predicted.

I suppose if it were to happen at any point during Cherry Blossom training, it should have been this week. It’s the only recovery week of the 10-week program before a push-up in mileage and speed training. But the coaches at Potomac River Running cautioned the difference between a recovery week and a week off, which I also knew, but there is a distinction. But I didn’t run between Monday and Thursday, and my first run of the week was on Friday. Oops.

So, what happened? Typically, at work, our staff has monthly staff meetings on Tuesday evenings but, since the Tuesday we typically meet was on Valentine’s Day, we moved it to Monday. I somehow missed that memo; thus, I had to move my scheduled cross-training to the next day or scrap it altogether. I didn’t think anything was wrong with that– some days just get derailed, and I had just run a grueling 10-miler the day before so I welcomed a day off to recover. On Tuesday, I came down with a migraine and nausea that didn’t fully subside until Thursday. I just felt too sick to run on both days. Thursday, I felt okay-ish to run, but it was also the first day that I was dog-sitting for an adorable golden retriever. Her owner dropped her off at my apartment that afternoon after work and, while I could have at least done an easy 3 miles on the treadmill in my apartment gym, I wasn’t sure how I felt about leaving the dog in a strange apartment when she was showing signs of separation anxiety after her owner left.

Alright, alright– so yeah, four days off from running. Didn’t plan that, didn’t want it that way. But it happens. If it happens to you, it doesn’t necessarily mean your training has been thrown totally out of whack. Depending on where you are and how seasoned you are, you may need to readjust your goals if you miss a lot of time. Usually, you just sort of pick up where you left off and take the intensity down a notch. Probably not a good idea to do an intense speed work or distance run the first day you come back from more than 3 days off, even if it is tempting when your legs feel fresh.

Despite this missed time off, I still really wanted to at least get 20 miles in for the week and I had a small window of opportunity to make that happen if I didn’t skip any runs between Friday and Sunday. I don’t like or recommend bottom-heavy training weeks like that, but I decided I could let myself have it that way if I took my runs at an easy-ish pace. So, here’s what I actually did this week.

Friday afternoon, battling some guilt about leaving the most adorable golden retriever puppy in the world at home alone while I worked, I decided to get my run in before going home for the day. I knew my chances of getting my run done for the day if I went home and saw the puppy first would be about 4%. So, I set out from my office and ran an easy-paced 6 miles up toward Rock Creek and back through the West End to my office. Crazy enough, I was on my feet for a total of 17.04 miles that day with all the dog-walking, walk-commuting, and running I did that day.

Saturday, my only goal was to get 5 miles in for the day, not only for the mileage, but because it was purely stunning outside. The weather could not have been any better– it was an unbelievable 68 degrees on President’s Day weekend in February. I had better sense to not wear a long-sleeve shirt and tights, but it’s hard to know what the default setting should be when the temps are record-breaking high. Do you default to “it’s February” or “it’s 68 degrees?” I opted for a long sleeve and, while I didn’t burn up, I’m sure I would have if I was going fast.

On Sunday morning, temps were in the mid-50’s to start with and a cloud cover that put the chill back in the air. There was a bit of a breeze, too. Remembering last week’s wardrobe disaster of a long sleeve and capri tights in mid-50’s weather, I decided I would be in shorts at least with a tank and probably arm warmers. Walking outside on my way to meet the long run group, I almost went back upstairs to throw on a long sleeve instead. Luckily, I didn’t. This weather is so confusing. I did a warm-up jog across the Key Bridge, having opted for a tank and arm warmers with shorts and overheated almost right away. I knew the arm warmers would be coming off sooner than expected. A lot of other runners were in shorts or tanks or both, including my fellow CUCB ambassador teammate Heather.

After 11 miles in 3 days following 4 days off, the 9 miles I had planned for the day felt totally daunting. For starters, the coaches only had 8 miles topped off for the advanced training group. But I wanted my 20 miles for the week, so I had 9 on deck. We looped across the Key Bridge and down along the Mount Vernon Trail and under the Arlington Bridge for about two miles. From there, some of the runners split off and the trail sort of grew vacant. I followed a couple of runners up ahead of me who I thought were part of the same long run group, but they were a little faster than I wanted to run that day. We crossed the 14th Street Bridge and looped the Tidal Basin, heading up to the Mall by way of the Bureau of Engraving and Holocaust Museum. From there, I was probably the only PRR group runner out there, but I stuck to the prescribed route, turning just after the Smithsonian Castle and zig-zagging the Mall to cross over to the Independence Avenue side to avoid getting stuck at traffic lights. I was feeling a little sluggish, and I didn’t have my Lumo Run with me telling me about my cadence or stride, so things felt a little quiet. I was definitely feeling like running was a chore and couldn’t wait to just get home. The final two miles along the river in front of the Kennedy Center and Watergate felt like five. I ended the run about half a mile short when I got back to the meeting point, quickly crossing out my name before heading up the stairs to finish the last half mile across the Key Bridge. My final pace was around 9:52. It didn’t feel easy, like a long should have during recovery week. I admit that I just wanted to be done than I wanted anything else, but I got my 20 miles for the week. 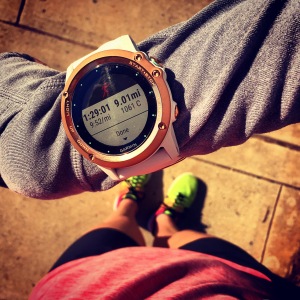 So, this week wasn’t a banner week. I’m glad I got the mileage down so that I hopefully won’t have lost too much ground in the following week, but I also realized that I am very much behind on maintaining some of the core and strength work I have been focusing on. There was a familiar pain in my right glute post long run, so I’m concerned with that. I’m hoping that a little rolling, ice, and some focus on the exercises I learned in PT will help course-correct.

Looking ahead to Week Five, with the weather being mild, I feel like I have literally no excuses now to not get my runs accomplished. Sure, I have things to do this week, but I don’t forsee anything springing up like it did in week four. And if it does, I’ll adjust the best way I know how.

P.S. Be sure to check out the new Cherry Blossom blog post from fellow CUCB ambassador, Adam Lesser, on what it means to “listen to your body” as a runner. Definitely applicable for me this week.