1) This has been the first week of using my new Garmin Vivofit 2, and I love it. It tracks your steps, miles, and calories burned even at rest during the day and your sleep at night. Plus, it comes with an alarm if you have been sedentary for too long (except at night when you’re asleep). I really needed that since I have a desk job and a sneaking suspicion that my hip pain is from sitting too long. Also, I bought it because, living in a city that is as walkable as DC, sheer curiosity of exactly how many miles I log on foot every day eventually got to me. I went with Garmin over other brands because I am brand-loyal and Garmin made my running watch. The first day that I used my Garmin Vivofit 2, I logged about 14 miles– 10 of which were from the Baltimore 10-Miler. The second day, a Sunday spent indoors and at the pool, I dropped down to just about 7,500 steps. Monday, I met my goal of 10,000 steps, but Tuesday was the winner so far in non-running mileage: 6.45 miles walked. That’s more miles than I run midweek during marathon training. It might be no wonder why I am always feeling exhausted, and now I’m wondering if I should be shooting for at least 9 hours of sleep a night instead of my standard minimum 8 hours. So far, my only real critique is that the syncing function doesn’t work very well. I’ve reset my goal steps to be permanently at 10,000 and yet it still logs it with 7,500 goal steps. You also have to sync it at your home computer or carry this itty bitty USB plug around with you that allows it to connect. Also, my activity doesn’t show up on my Garmin dashboard, either on my PC or iPhone app (which I had to download on my work iPhone because I still own the iPhone 4S). Also, the locking switch on the band is hard to maneuver with anything other than desert dry fingers. And the price dropped $20 after I bought it. Don’t you hate that? Hopefully these things will resolve themselves, but as of now, I’m happy with the purchase at least for the increase in awareness of my daily activity.

2) Given my upcoming move, I’ve been trying to use up the food that I have on-hand so I not only don’t have to worry about moving it on top of everything else (even if it is just up the street) but also so I can get a head start on cleaning the place for inspection since my move will be taking place over the July 4th holiday weekend and I refuse to do any moving stuff on a holiday. That said, I haven’t gone grocery shopping this week save for a couple of things picked up on my last Target run. I will neither confirm or deny that this idea came about out of my loathesomeness for grocery shopping. So far, my meals have looked like this:

Pretty sure I will relent and either throw things out or just get the grocery shopping over with. I grew up with 8 people in a house and not a lot of budget to feed everyone, so I learned how to be resourceful. Well, A for effort at least. By the end of the week, I was eating out. Lesson learned: just shop for food.

3) Speaking of food and resourcefulness, now that summer is here (sorry, spring), the season of iced coffee is upon us and my bank account sullenly reminds me that I spend too much on it. It’s stupid easy to refill your Starbucks or Dunkin accounts with cash, but at $2 for a tall iced coffee or a 3-block walk for a $0.99 Dunkin iced, it all adds up somewhere. On my aforementioned Target run, I had the most ingenius idea ever. Actually, the idea came from my mom and how she doled out Popsicles to my siblings and I when I was younger. Every week, she bought a box of Popsicles that she split evenly amongst all of us into 4 gallon-sized freezer bags with our names on them. We were allowed all of the Popsicles in the bag at any frequency that we wanted; however, once they were gone, that was all the Popsicles we got until she went grocery shopping again two weeks later. Freedom of decision-making and Popsicles for us, sanity for her. At Target, I saw that Starbucks sells jugs of iced coffee in various flavors for about $6 a gallon. So I thought, why not just buy that and then I can have all the iced coffee I want at work at a much cheaper price than $2 for 12 ounces? Brilliant. I’m writing this on Wednesday and that jug has barely touched the halfway point and I’ve had at least 4 glasses of it. And my bank account has $10 saved.

4) Summer came back this week, thank God. Last week, it was all clouds and drizzle and rain and temps in the 60’s. This week was sunny, humid, and highs in the mid to upper 90’s. I was able to get some pool time, so I was totally happy with this! 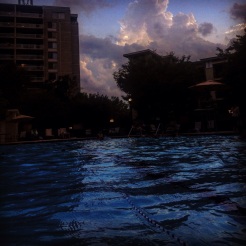 Pool running! It had thunderstormed about an hour before I got in the pool. Weird.

5) Have you signed up for The Skimm yet? It’s a once-a- day current events newsletter delivered to your email address of choice– they don’t spam you. I promise. But if you need to know what’s going on in the world and only have the amount of time it takes waiting in line at Starbucks to find out, then you need this in your life. Written in water cooler vernacular with the basics of journalistic integrity intact and sprinkled with pop culture references, The Skimm is what people didn’t think to suggest when they wondered what would come after the demise of news in print and the 140 character tweet. Seriously… sign up for The Skimm!

One thought on “Off the Beaten Path: Just Go Grocery-Shopping”