Race week is like Christmas. You’ve spent weeks preparing for the big day. And now your only job is to relax and eat carbs all week. Get 8-9 hours of deep sleep every night. Go on a short, easy run once or twice without worrying about pace– slow and steady to keep your legs fresh but not shot. At the end, there’s the big event when you get to see what’s waiting for you under the tree: did Santa hear your request for a PR? Will he make a good faith effort and get you something similar to your request but nonetheless enjoyable? Or will he completely miss the mark and leave you on the hook for next time? Whatever is going to happen on Race Day Morning has yet to be seen, but there’s joy to be found in the anticipation.

Well, that’s how I started the week anyway…

To say that I am impervious to race anxiety after having already run 4 marathons is a lie and a half. All week, I have been a nervous wreck. My stomach has been in knots so eating the massive amounts of carbohydrates and protein-packed foods that I need for fueling up and muscle recovery has felt like a reoccurring nightmare I had when I was a kid in which I was held at gunpoint and forced to eat everything on a restaurant menu before I could leave (seriously). 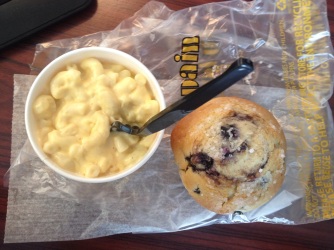 In addition, life doesn’t stop during race week. The pace at work has kept up its usual rhythm and, on Monday, I got an email from someone personally important to me who I had not heard from in years, and it pretty much took the levels in my emotional well to an all-time high. I’ve also been traversing along my morning commutes through DC’s sidewalks and transit system with the fragility of a daisy, which makes every bump and step feel like I’m running with the bulls. Someone accidentally crunched down on my foot when the train lurched to a stop and he, oblivious to how much room he was taking up on a crowded train, stumbled backwards with the grace of a drunken elephant. Also, when trying to get around a trudging tourist who was holding up the “just get me home” rush hour crowd going up the escalator, my hip swiped a cement barrier. The uneven streets of our nation’s capital means that I sometimes take a step and the ground below me is a few inches lower than my brain has registered to anticipate, sending a minor shock wave up my leg and into my hips when my foot slams the bottom of a sidewalk pothole. A loose chunk of sidewalk turned up under my left foot, causing me to roll my ankle and nearly trip over my right foot. At one point on Wednesday, I realized my pinkie finger hurt. Why does my pinkie finger have to hurt right before the race??

Above everything else, sleeping has been an utter challenge. My mind races constantly– I can’t shut it off. Monday night, I got maybe 3-5 hours of sleep. Tuesday night, I slept better but I woke up several times during the night— once because I downed a Nalgene of water right before bed (yes, I’m already hydrating and when I say Nalgene of water, I really mean 3 glasses of Pinot Noir), and once because the overnight winds blowing through my windows shifted and started blowing against my window blinds, causing them to rattle, thus waking me up. Wednesday, I practically bathed in lavender vanilla pillow spray, which knocked me out for what felt like a solid 8 hours.

I’ve basically taken running to a complete halt until the race, with the exception of a shakeout 2-mile run on Wednesday night. Good thing I did, too– the stabbing pain in my calf was back not only throughout the run but afterwards, too. This is incredibly troubling for me not only because of the pain itself, but because the pain makes me panic when I breathe because all I can think about is my pained leg. It’s hard to think about breathing patterns and cadence and form when it feels like there’s a shard of glass in your leg. So, Wednesday night’s run felt incredibly hard because the pain in my leg took center stage in my mental control center. And 4 days before the race, too. I spent Wednesday night foam-rolling my legs and slept in compression socks, thanking God that I had a PT appointment the next day.

The skies this week have also provided additional calm and excitement, too. 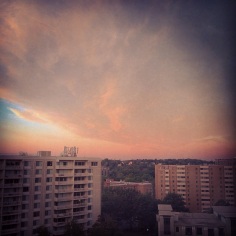 Along with carbing and hydrating, I’m starting to put in some prep work elsewhere….doing laundry…becoming my own personal DJ (Adele, you and your baggage are NOT allowed at my race; I don’t care how much money you made off your misery and what that says about female empowerment)…..and, of course, packing. Packing for a race, especially one that will likely present a range of weather scenarios in a place like Chicago, can be challenging so here’s my strategy: over-think every thing and pack all the things. I packed three running outfits, three sets of arm warmers, three pairs of compression socks, three running jackets, two pairs of running shoes, a foam roller, a rolling pin, and nearly every running gadget I could think to bring.