Here’s something that’s hard for me to admit: I have a Bachelor of Arts in English, I spent my entire childhood writing stories, and yet staying focused on a book is one of my greatest challenges. I really admire people who can just sit down and get lost in a book because frankly, I just can’t do it. I blame it on two things: I think way too much and, for some reason, I have to re-read something a few times over to really understand it. Curiosity requires discipline; who knew?

Even such, I have managed to keep my brain active with a few reads, so here are a couple of things that I have been reading this week:

1) Recently, I downloaded to my Kindle the “Runners World Cookbook: 150 Ultimate Recipes for Fueling Up and Slimming Down–While Enjoying Every Bite.” Because, as much as I like to tell people that I run so I can eat cupcakes and ice cream, we runners know that it’s not a good strategy for success on the trail. I am about to get into some serious training for Chicago, and I want my season to be good, so that means it’s time to health-up and eat like a runner. As expected, Runners World does a great job explaining why each of the recipe’s ingredients are beneficial to runners as well as categorizing each recipe into meal types as well as for pre-runs, post-run recovery, and even a category for running fast! Oh wait, no, that’s the category for recipes that are fast to make, haha. 😉 So far, I have made the Caprese Farro Salad and the Cherry Coconut Recovery Smoothie.

The salad was delicious (except I realized that I am creeped out by mozzarella balls, so I’ll have to figure out a good cheese substitute), easy to carry to work for lunch, and it kept well in my fridge all week. The smoothie is literally the weirdest color ever (or maybe because I added spinach and dark green hemp protein powder?) but it’s delicious, easy to make, and easy to drink (it’s not thick, though, so maybe add some Greek yogurt if you like thick smoothies). The ingredients aren’t too pricey either– I think I spent around $120 total for two weeks of supplies, but that price tag could also be because I had to buy a few pricey kitchen staples….and wine. At any rate, I can’t wait to keep cooking from this book!

2) Turning away from running to talk about an article I read about something that has never left my side. Once upon a time, out of sheer disbelief, morbid curiosity, and a strong personal connection as a woman, I opened an issue of Marie Claire to read an article about the horrific practice of female circumcision, or female genital mutilation. I learned that, in some countries, the practice of cutting a young girl’s vagina–specifically the portions that include the nerves which create pleasure during sexual intercourse–are cut to discourage sexual promiscuity and to purify a girl, usually a preteen, for marriage. The idea of it makes me clench my legs together in horror, but what’s even more shocking is that screaming in pain during the procedure (which, by the way, is typically done using unsterilized razors in areas without access to decent medical equipment) is considered to be dishonorable to the family. The health implications of female circumcision– higher rates of infection, complications and pain during childbirth and intercourse, not to mention the psychological spillover effects– are deplorable, and should be enough to discourage the practice. While some strides have been made, the New York Times published an article this week that sheds more light on the issue of “vacation cutting,” which is essentially when a young girl leaves the U.S. to visit her home country and gets circumcised while she is there. The article keeps this issue at the surface, because it has definitely not been eradicated altogether and the author doesn’t make a case that it should be based on the deep cultural sensitivities tied to it. However, the idea that a young girl is subject to a practice that jeopardizes her health and well-being as a mother, a wife, and a woman without fully understanding either the context of her own womanhood or her culture’s rationale for the practice is what makes this issue so heartbreaking to me. It blames her for “sins” she has not yet committed by the simple virtue that she has a vagina; for the simple fact that she was created that way and that her body was designed for sexual pleasure– regardless of whether she is married or not when having sex. Blaming the victim of any sexual violence or violence against women is at the core of this practice– and yes, I understand the cultural relativism here. And no, I don’t accept it. If a woman wants the practice done, she should be able to make that decision on her own for the sake of her family after she fully understands all of its implications on her well-being, but forcing a young girl to do this? It disturbs me.

3) In December 2012, I traded in the flute I played in high school and my twin sister’s high school clarinet to buy a Fender electric acoustic guitar. It’s a really beautiful instrument, and I have been wanting to learn guitar for about a decade now. No particular reason why– I mean, I am past the days in college when it was cool to be a guitarist and I have no desire to join a band, and you will definitely never see me on stage at a church– but I sort of like the idea of strumming away in the summer sun, just getting lost in the chords and making a joyful noise. So, I dusted off my copy of Guitars for Dummies, tuned my guitar using the built-in tuner, and stopped after 10 minutes when I realized my delicate fingers couldn’t handle the pain of pressing hard on the strings to make what I think is a chord. Sigh….this will be tougher than I thought. I may trade it in again, this time for a ukelele. But…..I am determined to learn this, because hello, why not? 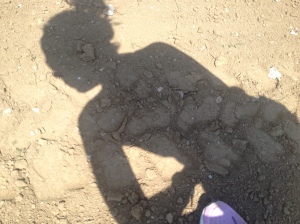 4) I’ve used this blog to air my frustrations about not being able to run as fast as I was able to at, say this time 6-12 months ago. I’m fed up with my 10:00-11:00 paces. Running that slow feels like a failure to me when finishing a mile nearly a minute and a half faster used to be my normal. Frankly, it’s because I can’t feel like I suck at one more thing in life….or that I was once great at something that I now completely suck at, especially when I work just as hard. But one thing I noticed during my crappy 2-miler last night was that my breathing seemed to be off. I noticed that, while running, I was breathing in the same manner that I would if I was panicking. So I asked myself what was making me panic, and my immediate answer was something along the lines of not being able to finish that mile at a “good enough” time. So, basically, not running my normal fast paces stresses me out to the point where I can’t even breathe properly. I’m so tensed up from the crushing thought of finishing my mile at a less-than-stellar pace that I can’t breathe. I think the emotional toll of constantly having to let go of my disappointment and, frankly, humiliation of running “crappy” paces has caught up to me. I think I have put too much emphasis on lying to myself that something is wrong and trying to let it go and not enough on being pissed off that I am, for some stupid reason, not the runner I used to be. I can’t answer that right away, but what I can do is work on increasing my lung capacity, and this article from Runner’s World gives me something to think about instead of “Yup, another 33:00 3-miler! It was just 5 months ago that I ran this same loop in 8:21 per mile, but WHATEVER! Twentieth ‘easy-paced run’ in a row…”

5) Summer reading is as essential as sunblock, the perfect swimsuit, and a beach body to show it all off. This is one of the reasons I bought a Kindle Fire last December– because, you know, “it would be so great to have it at the pool/lake/beach this summer!” Except there is one downside that has just become apparent to me: I can’t see the screen in full sun unless I turn up the screen brightness all the way, and even then, I’m just trying to read words against a reflection of my face, which shows off my double chin and concentration lines. Gross. So, it’s back to paperbacks for me, and this summer, I am re-reading one of my favorites: Paul Theroux’s “The Happy Isles of Oceania: Paddling the Pacific.” Theroux is one of my favorite travel writers not only for his wit and humorous  ironic cultural references, but because reading his books is one of the best ways to learn about the world and other cultures third to actually going yourself or second to opening an issue of Foreign Policy magazine. This book in particular details his journey on an inflatable kayak around the islands and coral atolls in the South Pacific, including all the contacts he made with islanders and the challenges of navigating the open ocean. Like I said in my intro, I often have trouble staying engaged with one book, but this is one that has kept me hooked throughout, and its setting makes it the perfect summer read.