Monday: Rest. I hate letting bad runs defeat me because it means that I am taking things way too seriously. But Sunday’s 13-miler was awful and left me feeling incredibly demoralized. All I could think about was, “My last half-marathon, I ran the whole thing nearly 3 minutes per mile faster than I just ran this one.” And with a half-marathon coming up in less than 6 weeks, all I could think about was that I was on course to fail. At something I put countless hours toward. I needed a day to regroup.

Tuesday: 6 easy miles at a 10:30 pace. Tuesday’s run actually went quite well. I was surprisingly in good spirits despite powerful wind and dead legs. The weather was finally nice and I sort of zenned out and ran. It was the lilt I needed.

Wednesday: Rest. Wednesday was supposed to be a speed work day for me. I was really looking forward to it– my planned workout was 8 x 600’s with a 400 recovery lap in between each 600. Yesterday’s run was hard as hell but completely exhilarating. When it gets hard, I try to remind myself that I am training for the back half of the marathon and that it’s supposed to feel hard. So today, while I was afraid of the usual demons of mediocrity and failure, I was ready to attack my workout. And then I got to the high school track where I ran last week and saw this: 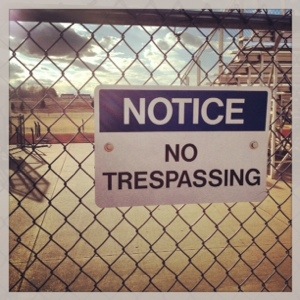 Talk about a WTF moment. First of all, I pay taxes. I am not afraid to play that card so long as I get a few dollars and cents tacked on to each sales receipt of mine. Second, no one was on the track. It was just sitting there, empty. Being 6PM, most kids had gone home for the day and I know this because I sat in my car for 15 minutes waiting for the girls’ soccer team to disperse after their practice to make sure I wasn’t interrupting theirs or anyone else’s practice. Third, I have used the track before without a problem and now I was being shut out. I guess all my running in circles was too much for people to handle. Ordinarily, I can handle a setback. But this set me over the edge. I had carbed up, rolled out, and mentally prepared for the mental challenge that is speed work. Plus, my training plan advises consistency and discourages switching days around and I had already taken a rest day after Sunday’s demoralizing 13-miler. I was ready to do speed work today but unexpectedly found myself without a place to do it and without an option to get it done. I could have gone on the treadmill but I think the constant dead leg feeling I have right now is from too much treadmill training. I could have done a tempo run but I was ready to run short, fast bursts and not one long consistent burst. I could have run easy but it was getting dark and I am not familiar enough with the trails to run in the dark. So I decided to go to the gym and do some strength-training, but really, my heart was still on the track that I had been shut out of.

Thursday: 6 x 600 with 600 recovery yards for a total of 7.5 miles at an average 10:56 pace. After yesterday’s major setback, I asked a co-worker with ties to the local running store for a good place to do speed work and found myself running between pine trees 12 times back and forth for 7.5 miles. It wasn’t ideal for me– I like the predictability of a marked track– but I got it done. Some things are just for the act of bearing.

Friday: 9 easy pace miles at a 10:47 pace. Friday’s run was…..wow. The wind has been so awful lately that my choices are to either to deal with it or resort to the treadmill. I knew I had to get outside and get my work done and, for the first few miles, the wind wasn’t that bad. But I turned a corner and BLAM the wind was in my face for the next three miles as I traversed up and over more hills than I knew I had in me. I tried not to think about it and even found myself admitting that the wind and hills were actually making me push harder and faster, but this was supposed to be an easy run and my legs were burning more than I wanted them to for a recovery run. Around mile 5, instead of completing the loop I had planned to run, I decided to turn around and go back the way I came. I needed a break– the wind was blowing so hard it felt like I was running in place. When it switched directions on me, it would blow me sideways and throw off my form as I tried not to stumble over my own two feet. I was wearing moisture-wicking clothing, but it was a much colder wind than I had dressed for and I could feel the cold chill of evaporating sweat all over me. But I was at least 5 miles from home and had no choice but to push through. Turning around was a sweet relief and a smart decision– the wind pushed me along instead of backwards for three miles. But I reached mile 8 and faced the wind again for the last two miles home and this was when my last shred of patience had been wasted. I don’t usually growl in frustration on a run, but I was audibly growling during that eighth mile. Finally, when my Garmin beeped at mile 9, I stopped. I was just done. The last mile home included a HUGE hill for 0.45 miles and my legs were exhausted, my spirits were sapped— I knew I was just going to end up walking it. So I did and checked the wind speed just before my iPhone died from being too cold: 31 mph winds. I had just run 9 miles in 31 mph winds at an incredibly decent recovery pace. I was massively impressed with myself, but it took over an hour to get rid of the chill in my bones.

Saturday: 3 tempo miles at 9:44 pace, 2 recovery miles at 10:54 pace. Saturday was just as windy if not more windy than Friday. Even though I was proud of my accomplishment on Friday, the idea of running in it again was a little too much to bear. What is with all of this windy lately anyways!? So I opted for the treadmill, but the run was harder than I thought. I intended to run 5 tempo miles but I could only eek out 3 tempo miles with 2 recovery miles. The most frustrating thing about this training plan and this particular training season is that I am running paces that, to me, feel very novice. My past training plans are chock full of average 8:30-9:30 pace runs and now, every single run at no less than a 10:30 pace feels challenging. I decided to cut back two tempo miles because I was breaking my “no treadmill” rule but also because I had plans with family and decided that some things are more valuable than a strong run. Something is better than nothing, even if it’s for the sake of sanity.

Sunday: 10 long miles at 10:06 pace. By now, I know when I need to cut myself some slack and Sunday’s run proved that I was right. I was at my parent’s home, which sometimes feels like a bigger setback than it should because then I feel obligated to spend time with my family instead of go out and run, and I was lacking some serious motivation to go for a run. But when I told my family that I would have rather given myself a rest day instead of go for a long run, instead of agreeing with me, they all told me I needed to go run. So I decided I would set 3 goals for myself: a bronze goal of 5 miles, a silver goal of 10 miles, and a gold goal of 15 miles. I chose to run around a park near my parent’s home that was approximately 0.75 miles for one loop and my brother thought I was crazy for wanting to run around in circles for 10 miles, but I knew the course was flat with a couple of turns and some tiny but steep hills, plus the added benefit of being able to set my water bottle down instead of carrying it with me the whole time. And my compartmentalization strategy completely worked. When I rounded to 5 miles, I saw that my pace was going to put me close to my prescribed long run pace, so I decided to run for another 5 miles since I was clearly on a roll. The last mile was the hardest, but I got through it and knew that I didn’t have another 5 miles in me (though, if I had gotten out there earlier, I might have had it in me). The run was spectacular. I enjoyed it immensely– finally!! It was the first time I felt like I was actually getting better at running and not worse.